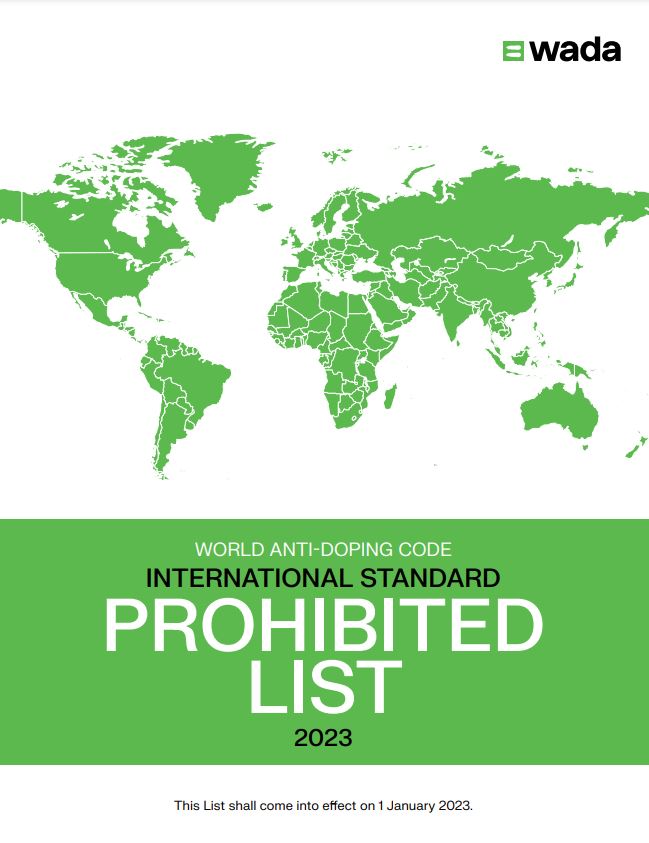 The WADA Prohibited List is among those rules, and identifies (by categories) which substances and methods are prohibited in-competition, out-of-competition, and in some cases, by specific sport. WADA conducts an annual review of the List and identifies if substances and methods should be added or removed, as well as if any categories and conditions should be modified or clarified.

WADA recently released the 2023 WADA Prohibited List, which will go into effect on January 1, 2023. While the Prohibited List is reviewed and updated, annually, significant changes may not always occur, which is the case for the 2023 Prohibited List.

For 2023, WADA only made clarifications to the List to help athletes and their support teams better identify and understand prohibited substances and methods. Some of those clarifications are highlighted and explained below, and a full list can be found here: Summary of Major Modifications and Explanatory Notes.

While USADA has a team available to help answer your specific questions (contact info below), we also urge you to use GlobalDRO.com to search the prohibited status of your medications and ingredients.

There were no changes to the status of any anabolic agent, but a few new examples were added to the Prohibited List. Several of these substances are illegally marketed in dietary supplements, which is among the many reasons that USADA reminds athletes to reduce their risk from supplements by using products that are third-party certified.

The new example include:

It’s important to remember that while the Prohibited List includes many examples, it is not exhaustive, and new examples may be added during the year. As always, the easiest way to check the prohibited status of medications is to visit GlobalDRO.com.

This section was updated to include antibodies against myostatin and myostatin precursors.

In clinical trials, such antibodies promote muscle growth, and they are being explored to treat muscle wasting diseases. Apitegromab was added to the List as one example of a new myostatin inhibitor antibody.

As in years past, WADA still requires athletes to have a Therapeutic Use Exemption (TUE) if they use a diuretic/masking agent AND a threshold substance at the same time, specifically formoterol, salbutamol, cathine, ephedrine, methylephedrine, and pseudoephedrine. For example, if you are on a diuretic medication (or on any other substance in the S5 category of the Prohibited List) for any reason and you are using an inhaler that contains salbutamol (albuterol) or formoterol, then you may need a TUE.

However, WADA has clarified that a specific class of diuretics called Carbonic Anhydrase Inhibitors, such as dorzolamide or brinzolamine, used in the eye in conjunction with a threshold substance does not require a TUE. This is because the local use of these substances in the eye won’t have an effect on other parts of the body. Dorzolamide and brinzolamine are sometimes prescribed as eye drops to reduce pressure in the eye such as in glaucoma.

Similarly, WADA has clarified that the use of felypressin in dental anesthesia in conjunction with a threshold substance is also not prohibited.

Lastly, torasemide (torsemide) was added as an example of a diuretic in the Prohibited List. The status of torasemide has not changed and it remains prohibited at all times.

Voxelotor was added as an example to this section.

Solriamfetol was added as a non-specified stimulant as it improves wakefulness in adults with excessive daytime sleepiness due to obstructive sleep apnea.

Also, a few more names for methylhexanamine were added as examples to this section.

Tramadol will become prohibited in 2024, as WADA has identified potential patterns of misuse since tramadol has been in the monitoring program. Because the status remains not prohibited in 2023, athletes can continue to use tramadol both in- and out-of-competition in 2023 without a TUE. According to WADA, the addition of tramadol to the Prohibited List will be delayed until 2024 to allow for sufficient education of athletes and athlete support personnel about this new rule.

There were no changes in the cannabinoid section of the Prohibited List, but WADA published its conclusions from a recent assessment it conducted on whether THC specifically should be prohibited. WADA concluded that:

Based on these three criteria, WADA determined that THC meets the criteria to remain on the List. More information about WADA’s decision on THC is available here.

WADA has clarified that use of corticosteroids in the ear (otic) is not prohibited.

Under the 2023 Prohibited List, beta-blockers will be prohibited in-competition in the sport of mini-golf (World Mini-Golf Federation).

Beta-blockers are already prohibited in-competition for all subdiscipline of freediving, spearfishing, and target shooting (World Under Water Federation CMAS). As of 2023, beta-blockers will also be prohibited out-of-competition. Athletes in these sports will need a TUE to use beta-blockers at any time, even if they are not competing.