T
rack and field athlete Alysia Montaño knows what it feels like to miss out on once-in-a-lifetime opportunities. Even though she has solidified her reputation as one of the top 800m competitors in the world, with seven USA titles and a fifth place finish at the 2012 Olympics, her running career never reached the heights it might have had she been competing on a level playing field.

While those around her found success with the help of performance-enhancing substances, Alysia competed clean – for herself, for her daughter, and for the sport itself. In a recent interview with USADA Communications staff member Averi Walker, she shares her experiences and explains why she competes clean. 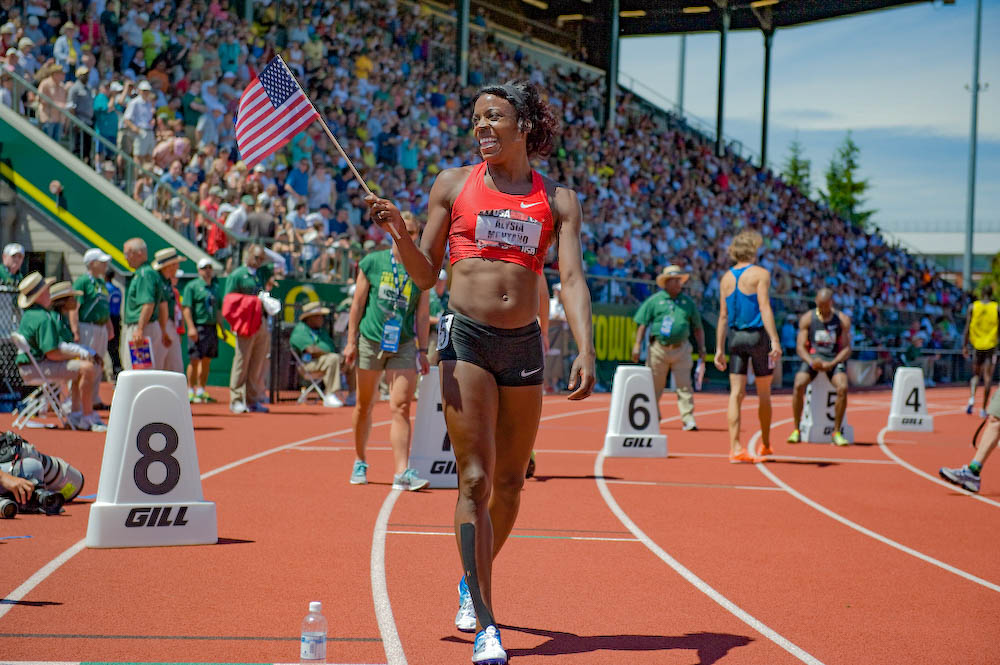 Averi Walker: Between 2011 and 2013, did you suspect that the athletes lining up next to you were doping? Did you want to speak out about it?

Alysia Montaño: Yes, from 2011 to 2013 I was definitely aware that people in my events were doping, and that performance-enhancing drug use was happening in my sport. To be honest, I was really alarmed that people weren’t saying anything about these athletes, but at some point these are very serious accusations and you don’t just throw them around without proof. So I just focused on myself.

After three years of this, I really had to push these thoughts down because it was clouding my vision. Occasionally, I would find myself thinking… where’s my level playing field?

So the short answer is yes, I absolutely knew that some of the people next to me in the starting blocks were doping. And at the end of the day… they ended up getting caught.

“And a lot of things happened between the 2013 and the 2016 Olympic trials. For one, my daughter was born in 2014. I really wanted to show her what true sport looks like, and I wanted for her to see me as a role model.”

Walker: How did your experiences during that time frame impact your race at the 2016 Olympic Trials?

Montaño: Those specific experiences made me really hungry for a win. And a lot of things happened between the 2013 and the 2016 Olympic trials. For one, my daughter was born in 2014. I really wanted to show her what true sport looks like and I wanted for her to see me as a role model. I wanted to be an example of how you can achieve anything if you do it honestly and hold on to your integrity.

So in 2015, I ended up with an amazing national championship title 10-months post-partum and made the world championship team. At that point, the sky was the limit, I was stronger and I was faster.

But then the first Independent Commission report came out in November and basically confirmed all of my suspicions. I had so many emotions about it…I was sad. I was mad. I felt like my career was a farce.

And then, I realized this is exactly what I want my daughter to see. I wanted her to see that if you stay true, you will win and you will be victorious. So I took another shot at the podium, hoping that the dopers weren’t going to be there and that it would be the most honest experience I would have in international competition. Rolling into the 2016 Olympic Trials, I was ready and I was fierce. I felt the fire and the desire. I thought this was my shot. And that made it even more heartbreaking when my run didn’t go as planned. I was gutted when I got tripped. But for myself and my daughter, I’ll keep persevering.

Walker: Surrounded by people who you knew were doping for years, what kept driving you to compete clean?

Montaño: Since I was a little girl, I’ve always been in awe of the idea of amazing. We talk about it all the time… we watch sport figures and other people do amazing things. So I always felt this yearning to understand what my amazing was in everything I did, even if it was just a spelling test.

But sport was this thing where you could quantify your progression and you could really think wow, I’m taping on this ceiling, I just broke the ceiling, and now I’m going to go break another ceiling. I’ve always really enjoyed that about sport and I love seeing what I can get out of myself.

I also compete clean because when you play with other people, hopefully on a level playing field, you can push each other as you go after a common goal. That’s really what I think is the beauty of sport and it has pushed me to be the best version of myself. It’s also inspiring to see the cyclical process of me pushing myself to be the best, which in turn, pushes other people to reach the best version of themselves. Montaño and daughter at the USA Track and Field National Championships in 2015.

Walker: Do you think clean athletes can win in sport today?

Montaño: Over the years, I raced against athletes who were doping time and time again, but I kept seeing that I was so close to beating those athletes.

As a clean athlete, I really believe that clean athletes can beat dopers, and I don’t want clean athletes to lose heart. I want them to recognize that their hard work does matter. At the end of the day, their reward will be that they can sleep at night knowing they did it true.

Walker: Why do you think anti-doping is so important to sport as a whole?

Montaño: I think anti-doping is so important to sport because – while I believe that we all have integrity within us – it always helps to have accountability. Anti-doping is that accountability for athletes to remain clean and remain true so that we can all have a level playing field for competition.

It’s also a way for athletes who win to say “look, I’ve been held to the highest standard – I’ve done it the right way.”

Walker: As a clean athlete, can you provide a message to junior athletes?

Montaño: If I were to say anything to youth athletes, it would be that at the end of the day, the truth always wins. Stay true to yourself and you will be victorious.