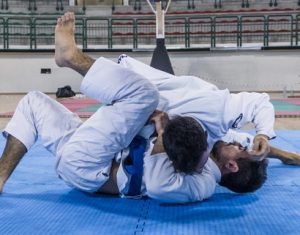 USADA announced today that Dr. Breno Faria, of Belo Horizonte, Minas Gerais, Brazil, an athlete in the sport of Brazilian Jiu-Jitsu and a nutritionist who was advising athletes, has accepted a four-year sanction for an anti-doping rule violation.

Dr. Faria, 34, voluntarily admitted to providing and encouraging a fellow Brazilian Jiu-Jitsu athlete, who was both his friend and training partner, to use a topical cream containing a prohibited substance prior to competing at the 2014 International Brazilian Jiu-Jitsu Federation (“IBJJF”) World Jiu-Jitsu Championships. At the IBJJF’s request, USADA conducted testing for the event in accordance with the World Anti-Doping Agency International Standard for Testing.

Dr. Faria’s recommendation of the topical cream resulted in the athlete testing positive for testosterone. Anabolic agents are prohibited under the USADA Protocol for Olympic and Paralympic Movement Testing, which has adopted the Code and the World Anti-Doping Agency Prohibited List. The athlete advised by Dr. Faria ultimately accepted a one-year period of ineligibility as a result of his positive test and anti-doping rule violation.

While Dr. Faria was not working in a professional capacity when he recommended the topical cream to his friend, his prohibited conduct occurred while he was acting in an athlete support role. As such, Dr. Faria was subject to the sanctions set forth in the Code for Athlete Support Personnel who administer prohibited substances or methods to athletes in their care. Under the Code, the sanction for the Administration of a prohibited substance ranges from a four-year period of ineligibility, at a minimum, to a lifetime period of ineligibility, at a maximum.

Given Dr. Faria’s voluntary admission of his anti-doping rule violation, USADA determined that a four-year period of ineligibility was the appropriate outcome in this case. Dr. Faria’s sanction began on February 7, 2015, the date he first disclosed and admitted his doping offense to USADA. In addition, Dr. Faria has been disqualified from all competitive results achieved in competitions sanctioned by the IBJJF or any Code signatory on and subsequent to May 28, 2014, the date the 2014 IBJJF World Jiu-Jitsu Championships started, including forfeiture of any medals, points, and prizes. IBJJF has agreed to impose the sanction.