Following his retirement in November 2016, USADA’s longtime Chief Science Officer Larry Bowers continues to be recognized for his critical contributions to anti-doping science, most recently with the 2017 Endocrine Society Laureate Outstanding Public Service Award. This prestigious award honors those who have demonstrated exceptional dedication to public service or awareness in the field of endocrinology. With the award, the Endocrine Society recognized Dr. Bowers’ more than 30 years of achievements that have helped protect the rights and health of clean athletes around the world.

Over the course of his career, Dr. Bowers has played a significant role in the improved identification of performance-enhancing drugs and has supported numerous high-profile initiatives to help level the playing field in sport. Before joining USADA, he spent eight years as the director of an International Olympic Committee-accredited drug testing laboratory, where his expertise in clinical chemistry and endocrinology yielded cutting-edge processes and standards for the detection of prohibited substances in international sport. Dr. Bowers’ has also been recognized for his work on the BALCO investigation, including leading the research initiative to characterize the “designer steroid” tetrahydrogestrinone (THG), which helped enable the suspension of numerous athletes involved in the BALCO scandal.

While accepting the Outstanding Public Service Award at ENDO 2017 in Orlando, Dr. Bowers thanked the Endocrine Society for recognizing the public service element of anti-doping and reflected on the nature of his work, noting, “It is about using research, education, anti-doping rules, and public policy to protect individual athletes at all levels of competition from the physical and psychological effects of performance-enhancing drugs.” 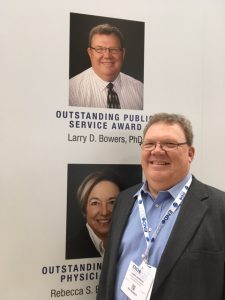 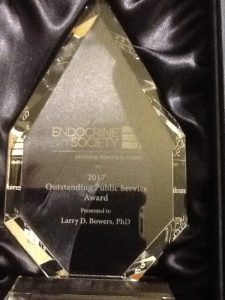