On September 9, 2015, SB Nation posted an article written by Mr. Thomas Hauser that contained no less than 40 inaccurate facts and misleading statements, as well as quotes from un-named, un-informed or self-interested sources about USADA and our role in anti-doping in the sport of professional boxing.

In order to provide truthful and accurate facts, and to stop the perpetuation of further rumors, speculation and false information, USADA has provided a detailed 25 page fact correction of the full article which can be found HERE. We have also included a brief overview of some of the most egregious inaccuracies below.

In regards to Mr. Mayweather’s Therapeutic Use Exemption (TUE):

The article makes several inaccurate statements about Mr. Mayweather’s TUE. Mr. Mayweather applied for and was granted a Therapeutic Use Exemption (TUE) by USADA for an IV infusion of saline and vitamins that was administered prior to his May 2, 2015, fight against Manny Pacquiao. Under the WADA Code, if an athlete has a need to use a prohibited method or substance, they may apply for and be granted a TUE. Having an approved TUE means that the athlete is not in violation of the anti-doping rules.

Mr. Mayweather’s use of the IV was not prohibited under the NSAC rules at that time and would not be a violation of the NSAC rules today. In fact, it is a common practice among athletes licensed to fight in Nevada. As such, it is illogical to suggest that Mr. Mayweather had an obligation to apply to NSAC for a TUE for a procedure that is not prohibited or otherwise monitored by them. Nonetheless, because Mr. Mayweather was voluntarily taking part in a USADA program, and therefore subject to the rules of the World Anti-Doping Code, he took the additional step of applying for a TUE after the IV infusion was administered in order to remain in compliance with the USADA program.

Furthermore, the prompt reporting of the TUE after its approval was in accordance with the terms of the testing agreement that was signed by both athletes. The NSAC was provided with the testing agreement and expressly advised of the procedure USADA would utilize to review, approve and report TUEs via email on April 6, 2015. In accordance with the agreement both Mr. Pacquiao and the NSAC were notified of the IV in May as soon as a TUE was approved.

“Mr. Mayweather has done nothing wrong. The Nevada State Athletic Commission has no interest in any type of investigation regarding his IV. He did not violate the WADA Prohibited List for any type of drugs that are prohibited on that list, and we have no interest in it whatsoever.”

Contrary to Mr. Hauser’s unsubstantiated claims that USADA does not utilize CIR testing on the basis that it is “unnecessary and too expensive,” USADA absolutely conducts CIR testing as part of our professional boxing testing programs. For instance, CIR testing was conducted on all 22 urine samples collected from both Mr. Mayweather and Mr. Pacquiao during the testing program in advance of their May 2, 2015 fight.

USADA maintains, however that focusing only on CIR testing is not up to current scientific practices. USADA also utilizes the Athlete Biological Passport (ABP) to longitudinally monitor an athlete’s urine and blood profiles, which allows us to look for any minor or major fluctuations in an athlete’s blood and steroid values, including fluctuations in their T/E ratio. If there were to be any fluctuations, they could lead to additional targeted testing. In addition, USADA’s professional boxing testing programs include testing for EPO, hGH and peptide hormones.

In Regards to the Erik Morales Case:

The article made several inaccurate statements regarding Mr. Morales’ case. Despite Mr. Hauser being provided accurate dates that refuted his claims prior to his story being published, the incorrect information was included anyway.

Contrary to Mr. Hauser’s report, all of the out-of-competition (OOC) samples collected by USADA from Mr. Morales were collected prior to USADA receiving notice from the laboratory that Mr. Morale’s first sample had tested positive for a prohibited substance on October 16, 2012. USADA did not withhold or mislead the New York State Athletic Commission (NYSAC) about the status of Mr. Morales’ samples. Rather, USADA advised the NYSAC of the A sample positive test on October 17, 2012, prior to any media reports being published, and worked diligently with the laboratory to expedite the analysis and processing of the B sample, as well as the other remaining OOC samples to ensure the NYSAC could consider that information in advance of the scheduled bout.

Given that USADA does not allow blackout dates for testing, we are regularly testing and may collect a sample or multiple samples before the results from previous samples are returned from the laboratory. 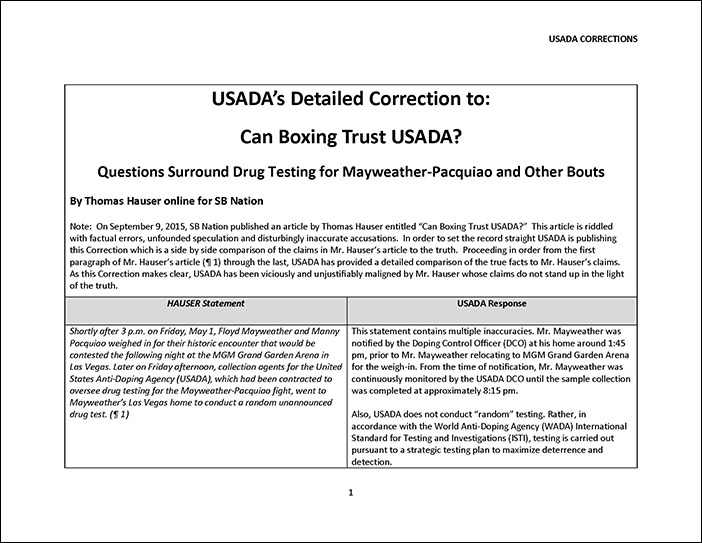 In professional boxing, USADA does not have the authority to prevent a fight from occurring. That is a decision that must be made by the appropriate boxing commission, the promoters, and the athletes scheduled to participate in the boxing match. That is why the NYSAC was promptly informed of the A sample positive along with the promoter and both fighters.

Mr. Morales’ case was adjudicated by USADA in accordance with the rules, and he received a 2 year sanction. An announcement of that sanction can be found at here.