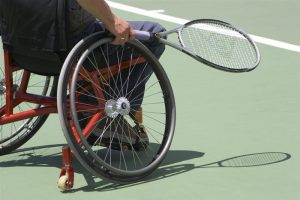 USADA announced today that an independent arbitrator from the American Arbitration Association (AAA) has rendered a decision in the case of wheelchair tennis athlete Taylor Graham, of Lincoln, Neb. After an evidentiary hearing on March 21, 2022, where both Graham and USADA were provided a full opportunity to present their cases and witnesses to the independent arbitrator, the arbitrator determined that Graham will receive a four-year sanction for his refusal to provide a urine sample.

Graham, 27, refused to provide a sample as requested by a USADA doping control officer during an out-of-competition test on September 8, 2021. Evading sample collection, or refusing or failing to submit to sample collection, without compelling justification, is an anti-doping rule violation under the USADA Protocol for Olympic and Paralympic Movement Testing, the United States Olympic and Paralympic Committee National Anti-Doping Policies, and the International Tennis Federation Anti-Doping Programme, all of which have adopted the World Anti-Doping Code and the World Anti-Doping Agency Prohibited List.

Graham’s four-year period of ineligibility began on October 15, 2021, the date his provisional suspension was imposed. In addition, Graham has been disqualified from all comp 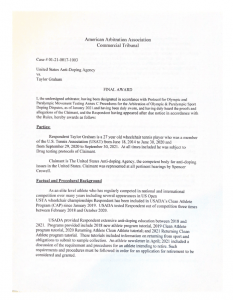 etitive results obtained on and subsequent to September 8, 2021, the date he refused to provide a sample, including forfeiture of any medals, points and prizes.

In addition, USADA manages a drug reference hotline, Global Drug Reference Online (www.GlobalDRO.com), conducts educational sessions with National Governing Bodies and their athletes, and distributes a multitude of educational materials, such as a supplement guide, a nutrition guide, an clean sport handbook, and periodic alerts and advisories.