Vitamins, Minerals, and Other Supplements

Many athletes believe they do not get enough vitamins and minerals in their diet and wonder if they should start taking some sort of supplement; while other athletes are on a constant quest to find the latest diet or supplement that will give them a competitive edge. The reality is that making wise food and beverage choices are crucial for peak performance and contribute to endurance and repair of injured tissues. A good working knowledge and understanding of foods that provide essential nutrients will aid in an athlete reaching their greatest potential.

Athletes have increased energy needs, which allows for more opportunities to obtain the nutrients they need through a balanced diet composed of a variety of natural foods. Most sports nutrition professionals agree that supplementation will not necessarily improve performance

However, the athlete who takes a simple one-a-day type of vitamin or mineral that does not exceed the nutrient levels of the Recommended Dietary Allowance (DRA)/Dietary Reference Intake (DRI), is probably not doing any harm, especially if it is third-party tested. An athlete should consult with his or her sports dietitian, or other health care professional, to determine whether vitamin and mineral supplementation is needed to maintain optimal health.

Nutrients that may be low in an athlete’s diet are listed in Table 11. Choose a variety of foods in each food category to ensure that all nutrients are included in your diet.

Athletes should always choose food over dietary supplementation. The body needs more than 40 nutrients every day and supplements do not contain all the nutrients that are found in food. Supplements cannot make up for a poor diet or poor beverage choices. 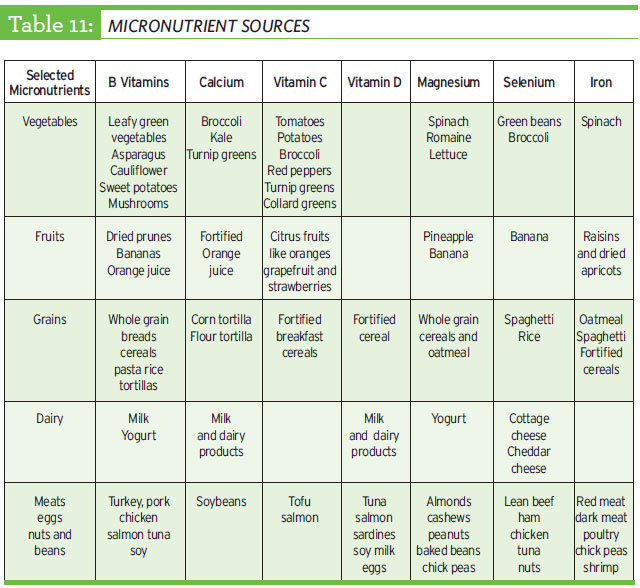 Natural foods contain a matrix of various nutrients that researchers are continuing to discover and learn more about. Often individual nutrients don’t work as effectively when isolated in a pill or supplement form.

Self-prescribed supplement users should heed overdose warnings and look for symptoms of toxic levels of supplementation, such as diarrhea, skin rashes that do not fade, and unexplained joint pain. Fat soluble vitamins (A, D, E, and K) can be toxic when misused. Unlike water soluble vitamins in which excess amounts are excreted in the urine, fat soluble vitamins are stored in body fat and remain in the body.

Remember that more is not always better. The established Recommended Dietary Allowance (DRA)/Dietary Reference Intake (DRI), for vitamins and minerals are to be used as a guide in determining nutritional needs. These allowances have a large margin of safety built into the recommendations. Even though it has been shown that a severely inadequate intake of certain vitamins and/or minerals can impair performance, it is unusual for an athlete to have such severe nutritional deficiencies. Even marginal deficiencies do not appear to markedly affect the ability to exercise efficiently.

Athletes searching for a competitive edge often look to a supplement or a special combination of nutrients to find it. However, there are no quick-fix supplements for improving sports performance. Consuming a wide variety of foods and staying well hydrated are the basic cornerstones to reaching athletic potential.

For athletes subject to sport drug testing, taking nutritional or dietary supplements may cause a positive test for a prohibited substance that may not be disclosed on the product label. In accordance with all applicable rules for a positive test result within a sport, a sanction may be imposed.

Some trade associations and other businesses have programs that include analytical testing and quality assessment of dietary supplements, culminating in a “stamp of approval’ or a “guarantee” that the supplement is safe for use in sport. These programs may reduce the risk that a supplement is contaminated, or contains an undisclosed ingredient. HOWEVER, it does not eliminate this risk. Athletes who take dietary or nutritional supplements, even if claiming to be “approved” or “verified,” do so at their own risk of committing an anti-doping rule violation, or suffering from negative health side-effects.

Supplements and Your Health

The increased visibility of many vitamins, minerals, herbals, as well as other dietary supplements, some argue, can be attributed to the passage of the Dietary Supplement Health and Education Act (DSHEA) in 1994. Under DSHEA, the Food and Drug Administration (FDA) DOES NOT regulate any supplements including vitamins, minerals, amino acids, herbals, and other botanical preparations for safety or efficacy (whether they work).

Additionally, the passing of DSHEA allowed manufacturers to publish only limited information about the benefits of dietary supplements. It is easy for products to get to the marketplace without pre-market controls, and if necessary, they are extremely difficult to remove, even when serious health concerns are raised about their safety.

The Anabolic Steroid Control Act of 2004 (SB 2195) took effect on January 20, 2005 as an amendment to the Controlled Substances Act. The Act classifies a number of prohormones or steroid precursors, previously manufactured as dietary supplements, as controlled substances, making their distribution illegal without a medical prescription. According to this Act, possession and/or distribution of these substances can be punishable by up to five years in prison.

Did you know? While some mainstream supplements are made by responsible manufacturers, a growing number of supplement products contain dangerous and undisclosed ingredients, including steroids, stimulants, and other dangerous drugs. One major issue is that unscrupulous companies are marketing supplements spiked with these dangerous substances, taking advantage of many consumers’ desires for maximized sport performance or aesthetic improvements, and advertising them as healthy and safe products when they’re not.

Most Americans are unaware that designer steroids and other dangerous drugs are intentionally being sold as dietary supplements and that current law makes it too easy for these products to get to the market. Best estimates suggest that there are hundreds of supplement products currently available that contain one or more of approximately 20 to 25 designer steroids alone. Initial evidence of supplement contamination was established in a 2004 market survey from an International Olympic Committee accredited lab, during which 15 percent (94) of the 634 supplements analyzed were found to contain hormones or prohormones not listed on the supplement label. Since the study, numerous other reports of contamination, mislabeling, and alteration of supplements have continued to surface from independent research.

Contamination can also occur. In the United States, high-profile athletes who test positive from contaminated or intentionally spiked supplements containing undisclosed prohibited substances can be made ineligible for competition.

Given the overall possibility of supplement contamination, the risk of taking a mislabeled supplement is a real threat to the careers of American athletes and the health of all consumers. Some products can be unintentionally adulterated with substances such as pesticides or heavy metals, while others may be inadvertently contaminated with sport-prohibited substances due to cross-contamination. While there certainly are supplements that are safe and pure, it is possible for one batch of a product, for example, to become contaminated with a dangerous or sport-prohibited substance when manufacturing equipment isn’t cleaned properly and contains remnants of ingredients from a previous product. This is similar to what can happen in a factory that manufactures nut products, as well as other products like cereals and breads. If the machines aren’t cleaned correctly or if particles or dust permeate manufacturing areas, the breads or cereals can contain remnants or traces of the nuts, which can be potentially dangerous to those with nut allergies.

The health consequences are numerous. The consumption of these dangerous hidden drugs, such as designer steroids, has been a known cause of liver injury, stroke, kidney failure, and pulmonary embolism.

The inclusion of stimulants in supplement products also has the potential for harmful effects. Some stimulants can cause increased blood pressure, irregular heart rhythm, stroke, or even death.

Protect yourself! This is a REAL concern. Rather than relying on advertisements from companies who are trying to sell you their product, as a consumer, you have the responsibility to educate yourself. In the world of anti-doping, strict liability applies and athletes are responsible for what is in their systems at the time of a drug test. Anabolic steroids and stimulants are prohibited classes of substances in sport. It is up to the athlete or consumer to research reliable sources of information that can point out the many substances that are known to be included in supplements and that may, in fact, damage one’s health or an athletic career.

More Information. For more information on supplement concerns in the United States and to learn how to become an informed consumer, please visit www.Supplement411.org. Supplement 411 attempts to give dietary supplement users the often overlooked and misunderstood facts about the dietary supplement industry; raise awareness to the reasons why risk exists in the marketplace; and provide tips, tools and resources for making the best decisions possible.

Read the full Nutrition Guide and learn more about how to get peak performance with optimal nutrition.