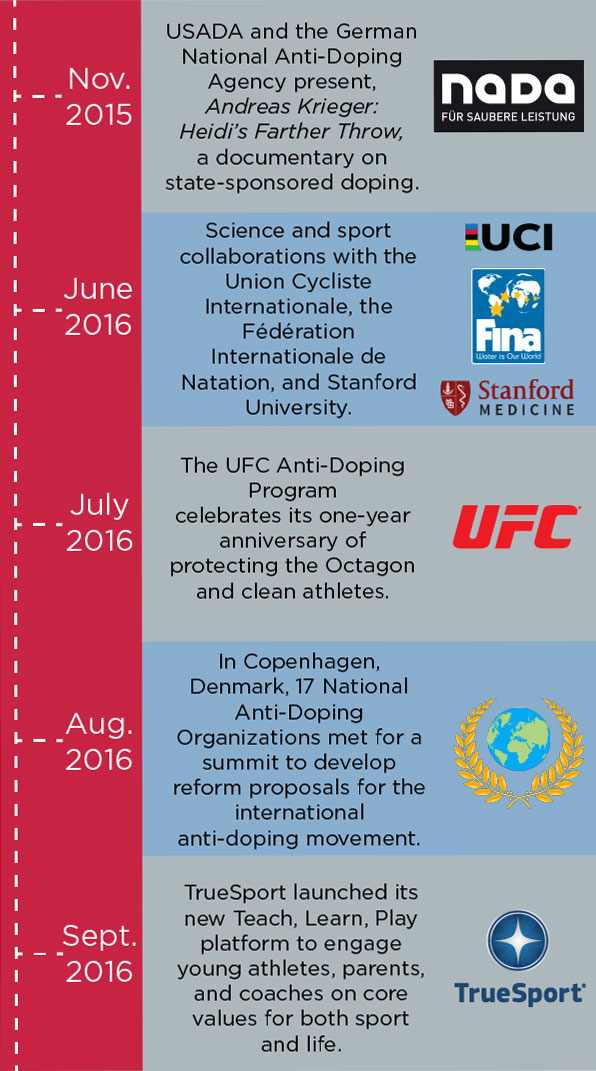 On October 1, 2016, USADA celebrated 16 years spent in service of clean athletes and the integrity of sport. Our 16th year has been a busy one, largely spent preparing for the 2016 Olympic Games in Rio and advocating for clean sport on a global scale.

Over the course of the year, we’ve dedicated substantial energy towards advancing a number of anti-doping resources for athletes, including our Supplement High Risk List, to which we added 99 new supplements for athletes to avoid because they contain prohibited substances. We also helped improve the usability of Global Drug Reference Online (Global DRO) and welcomed Australia to the partnership in a move that will increase the effectiveness of the platform.

In 2016, USADA further supported clean sport by sending team members to work the Rio Olympics and by growing a robust anti-doping program for the UFC.

Below, we’ve highlighted some of the most important moments from USADA’s 16th year:

Documentary on the Consequences of State-Supported Doping

In partnership with the German National Anti-Doping Agency, USADA also helped shed light on the consequences of a former state-supported doping program in the short documentary Andreas Krieger: Heidi’s Farthest Throw. The film explores how a state-supported systematic doping campaign in communist East Germany impacted shot putter Heidi Krieger (now known as Andreas), who was unknowingly subjected to the doping program and its long-term consequences.

By sharing his story, Krieger shows how the win-at-all-costs attitude hurts athletes and perpetuates a system in which it’s difficult for athletes to compete clean. The powerful film debuted in November 2015 and can be viewed at: USADA’s Video Library or www.andreas-krieger-story.org

Launched in July 2015, the UFC Anti-Doping Program celebrated its one-year anniversary in 2016. The first year of the program was primarily spent educating athletes about their rights and responsibilities within an anti-doping program, with USADA team members traveling around the world to educate UFC athletes in-person. In just the first six months, USADA participated in two athlete summits, visited numerous major UFC gyms, and provided in-person education to athletes before at least 13 UFC events on almost every continent.

The first six months also saw 87 international testing missions in 10 countries, including Brazil, Japan, and Thailand. During the first year of the program, USADA was able to conduct more than 1,300 in-competition tests and no-notice out-of-competition tests.

The UFC Anti-Doping Program has received positive feedback from both athletes and other stakeholders. For example, UFC Light Heavyweight Champion Daniel Cormier said, “The steps that UFC and USADA are taking to ensure that every UFC athlete is competing clean moves UFC ahead of every other major professional sport organization around the world.”

Major Collaborations in Science and Sport

To promote a robust anti-doping system, various stakeholders have to work together, which is why USADA developed a number of collaborative initiatives with leading stakeholders in 2016. In June, USADA announced its partnership with Union Cycliste Internationale (UCI) to streamline anti-doping efforts and protect clean athletes in the sport of cycling. Under the partnership, the organizations agreed to share relevant anti-doping information, intelligence and athlete biological passport data, while also participating in joint investigations, testing missions, and other initiatives.

Soon after, USADA publicized its partnership with Fédération Internationale de Natation (FINA) and 14 other National Anti-Doping Organizations (NADOs) to implement a global collaborative testing initiative in the six months ahead of the 2016 Rio Olympic Games. The participating organizations jointly developed a comprehensive and strategic test distribution plan in response to requests from swimming athletes. Through the initiative, the partners conducted an average of five to seven out-of-competition tests for each country’s top ten male and female swimmers in every Olympic aquatic discipline.

Most recently, USADA helped introduce the first and only anti-doping course in the world offering continuing medical education (CME) credit to physicians, which it developed and presented in collaboration with Stanford University School of Medicine. HealthPro Advantage: Anti-Doping Education for the Health Professional is a free course for health care professionals who treat and advise elite and/or recreational athletes governed by the World Anti-Doping Code, and who are similarly subject to those anti-doping policies and rules.

The NADO Summit for Reform Proposals

Recognizing the need for reform within certain areas of the global anti-doping system, USADA was one of 17 National Anti-Doping Organizations (NADOs) that met for a summit in Copenhagen, Denmark, in August to develop reform proposals related to major issues in the international anti-doping movement.

The NADOs made a number of recommendations, such as calling for the separation of sport from investigatory, testing, and results management operations. The NADOs also called for long over-due whistleblower protections and governance reforms to establish a more independent World Anti-Doping Agency.

TrueSport, a grassroots movement powered by the U.S. Anti-Doping Agency (USADA), recently launched its new Teach, Learn, Play platform, which is an interactive collection of online resources created to engage young athletes, parents, and coaches in order to transform the culture of youth sport in America. TrueSport.org provides materials and activities that help young athletes develop the core values and skills necessary to succeed in both sport and life.