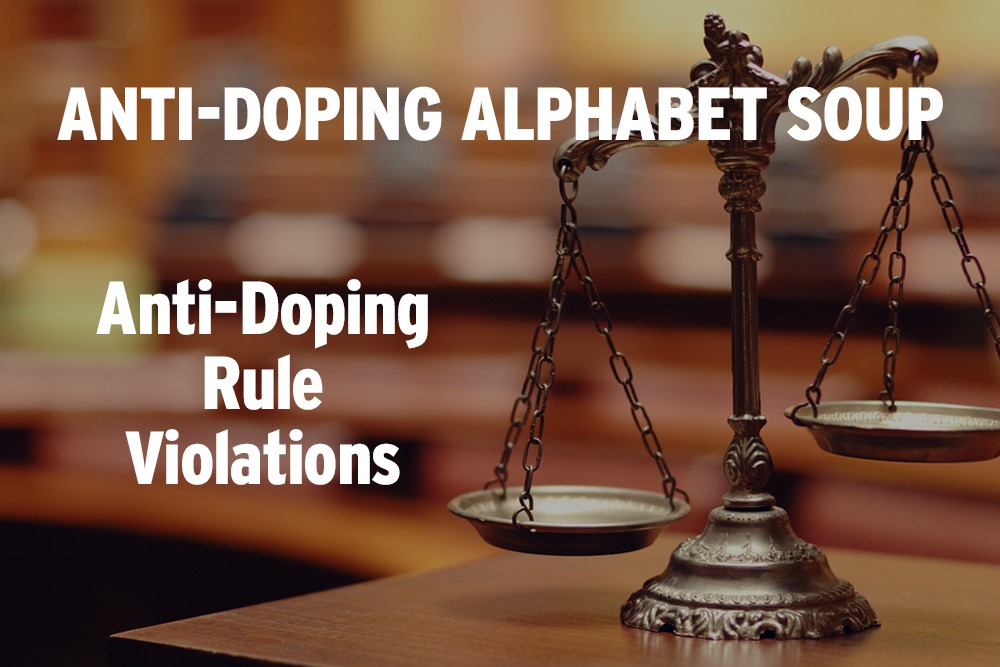 In the news recently, you may have encountered the “alphabet soup” of the anti-doping world. From acronyms like ADRV and AAF, to terms like provisional suspension and non-analytical, it can be difficult to understand the terminology and what it truly means. Previously, we explored key terms in results management. Today, we delve deeper into the nuances of Anti-Doping Rule Violations, or ADRVs.

According to the World Anti-Doping Agency (WADA), there are two types of ADRVs – analytical and non-analytical. Let’s look at the differences between the two.

WADA defines an analytical ADRV as the “presence of a prohibited substance or its metabolites or markers in an athlete’s sample,” or in simpler terms, a positive test. Of course, not all positive tests result in ADRVs.

Non-analytical ADRVs cover far more situations and circumstances. According to WADA, “a non-analytical ADRV is a case in which an athlete or athlete support person (coach, trainer, manager, agent, medical staff, parent, etc.) commits another type of ADRV that does not involve the detection of a prohibited substance or prohibited method in a urine or blood sample from athletes.”

So, what are the various types of non-analytical ADRVs? Here are some of the most common.

The WADA Code defines tampering as “intentional conduct which subverts the doping control process but which would not otherwise be included in the definition of prohibited methods.” In practical terms, this could include procuring false testimony from witnesses, or falsifying documents submitted to an anti-doping organization. It may also include offering or accepting a bribe, impeding sample analysis, obtaining false witness testimony, or any other intentional interference (actual or attempted).

A well-known case of tampering involved Chinese swimmer Sun Yang, who had a confrontation with a Doping Control Officer (DCO) in September 2018 that ended in the destruction of his blood sample. The athlete’s suspension was upheld on appeal.

The Code defines complicity as including but not limited to “assisting, encouraging, aiding, abetting, conspiring, or covering up” an ADRV by another person (actual or attempted). In the Alberto Salazar case, for example, arbitrators found Dr. Jeffrey Brown complicit in Salazar’s possession of testosterone with respect to a testosterone excretion experiment (among other violations).

In anti-doping, trafficking relates to “selling, giving, transporting, sending, delivering or distributing a prohibited substance or prohibited method,” excluding legal medicinal purposes and permitted out-of-competition uses, per the Code. Many notable USADA cases have involved trafficking violations, including the USPS Pro Cycling Team Investigation. Trafficking is also one of the chief accusations levied against the Russian government in their state-sponsored doping system.

“Evading sample collection; or refusing or failing to submit to sample collection without compelling justification” is treated just as a failed test is, and thus an ADRV, per WADA. This was also a key component to Sun Yang’s case, as he refused to provide a sample.

It is also unacceptable for athletes to verbally abuse, threaten, or otherwise mistreat a DCO. USADA will review to determine if such behavior constitutes a failure to comply ADRV and will report this behavior to the athlete’s National Governing Body to address under its disciplinary rules.

These rules and consequences may also apply to athlete support personnel (e.g., coach, parent, agent). Interfering with the doping control process and/or encouraging the athlete to evade, refuse, and fail to comply with any part of the process could put the athlete’s future in jeopardy and result in an anti-doping rule violation for support personnel and the athlete.

Athlete support personnel are those most often involved in cases of administration, or “providing, supplying, supervising, facilitating, or otherwise participating in the use or attempted use by another person of a prohibited substance or prohibited method,” according to the Code. Much like trafficking, this does not apply to legal medicinal purposes and permitted out-of-competition use. This was one of the charges against Dr. Jeffrey Brown, who, as a consulting doctor for the Nike Oregon Project, administered an L-carnitine infusion in excess of the allowed volume limit.

The World Anti-Doping Agency (WADA) recognizes that athletes who want to cheat typically do not do so alone. More often than not, there are people alongside them encouraging and aiding them in their cheating practices. In order to help stem this tide and protect competitors from people who would use their position of power or influence to prey on athletes, the World Anti-Doping Code prohibits an athlete from KNOWINGLY getting assistance from coaches, trainers, physicians, or other athlete support personnel who are sanctioned and/or criminally convicted of doping. Some examples of assistance include obtaining training, nutrition, or medical advice, and/or allowing the individual to serve as an agent or representative.

There are three types of prohibited association:

Athletes in USADA’s Registered Testing Pool (RTP) and Clean Athlete Program (CAP) are required to file their Whereabouts (or location) with relevant anti-doping organization(s). RTP athletes are subject to Whereabouts Failures, of which there are two types– Filing Failures and Missed Tests. Any cumulation of three Missed Tests or Filing Failures in a 12-month period can result in a potential ADRV and a period of ineligibility of up to two years for a first violation.

You can refer to USADA’s Clean Sport Handbook for more information or contact the USADA Elite Education Team with questions at education@USADA.org.